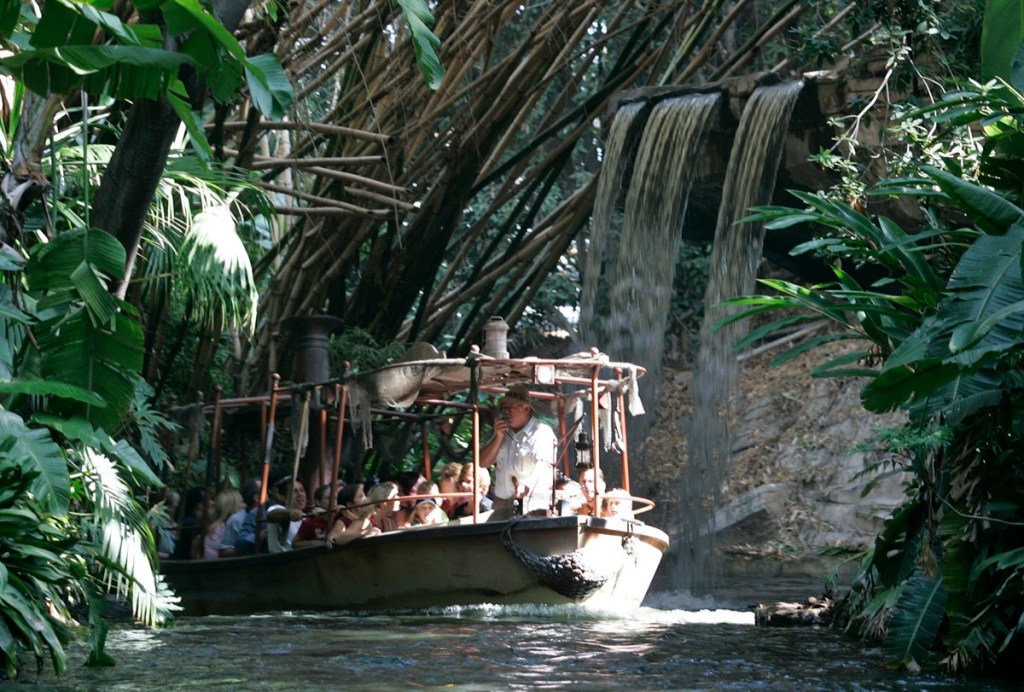 Disney Parks just announced that another fan-favorite attraction will be undergoing a partial redesign because of problematic and racist depictions of certain indigenous cultures. In a Jan. 25 post to the Disney Parks Blog, it was revealed that the Jungle Cruise ride at both Disney World in Orlando, Florida, and Disneyland in Anaheim, California, will be updated to “reflect and value the diversity of the world around us.” For what to expect from these changes, read on. And for more on the company’s past, here are 10 Disney Classics That Have Been Called Out for Racism.

The Jungle Cruise ride has been around since the ’50s.

The Jungle Cruise attraction made its Disneyland debut in 1955 and then opened in Disney World in 1971. Located in Adventureland, it’s a river boat ride enhanced by animatronic displays and a humorous live commentary by the boat’s “skipper.” The scenes that guests are treated to in their journey, which is designed to mimic waterways in South America, Africa, and Asia, include depictions of native people that have been called racist. There are also Jungle Cruise rides in Tokyo Disneyland and Hong Kong Disneyland, but the company has yet to announce any changes to those park attractions.

Disney is acknowledging that some imagery on the current version of the ride is harmful.

In light of the announcement, the D23 blog interviewed Chris Beatty, Walt Disney Imagineering Creative Portfolio Executive, who was clear about the elements of the Jungle Cruise that need a more sensitive rehaul.

“We want to make sure everybody has the best time—that guests from all over the world can connect with the stories we share and that how we bring those to life are respectful of the diverse world we live in. And when they get off the attraction, they know that we have done our homework because these are the details that matter. When you look at the Jungle Cruise, as it is today, there are just a couple of scenes that don’t do that and needed a refresh,” he said.

Speaking to specifics, Beatty also added that the design will be “addressing the negative depictions of ‘natives.'” No completion date has been announced, but they’re hoping to have the new versions open to the public within 2021. For more on the company’s reckoning with its earlier missteps, check out Disney Admits These Movies Have Had a “Harmful Impact” With New Warning.

So what will the updated Jungle Cruise look like?

The Disney Parks blog post included an announcement video hosted by a current Imagineer and former Jungle Cruise skipper, Kevin Lively. He previewed the new Jungle Cruise, saying, “As part of this story update, we’ll get to follow a skipper and his passengers as their journey goes awry. That’s right, for the first time ever, the skipper role will not only be that of a live, experienced and witty guide, but also represented by a show figure within the attraction itself. In fact, the expedition will be up a tree after their sunken boat splits apart and chimps board the wreckage, with monkey business ensuing.” He goes on to say that a few retired Jungle Cruise boats will find new life within the updated story.

Don’t expect to see characters from the Jungle Cruise movie in the new version of the ride, however.

Disney fans may be wondering whether part of the reason the ride is getting its makeover this year is because the feature adaptation of the attraction, also called Jungle Cruise, is currently scheduled to be released in June. But Beatty told D23 that the ride won’t be taking its cues from the upcoming Dwayne Johnson and Emily Blunt movie.

He clarified that “these adjustments are really focused on enhancing the existing attraction storyline and addressing some areas that needed refreshing along the way. I’m sure the film is fantastic and we’re very excited about it, but integrating the film into our classic Jungle Cruise is not part of this effort.”

However, Beatty did pretty much promise that the reimagined ride will include Easter eggs from the film, so you’ll want to keep your eyes peeled the next time you board one of its steamers.

This announcement comes a few months after another Disney ride underwent major changes.

For years, fans have wondered why the iconic ride Splash Mountain still included characters from the 1946 Disney film Song of the South, which is built around such racist material that it’s not even available to stream or buy. In June of last year, it was announced that Splash Mountain would be re-themed around the 2009 film The Princess and the Frog, which features Tiana, the first Black Disney princess. And for more from the House of Mouse, we’re Ranking Every Disney Live-Action Remake, From Worst Reviewed to Best.