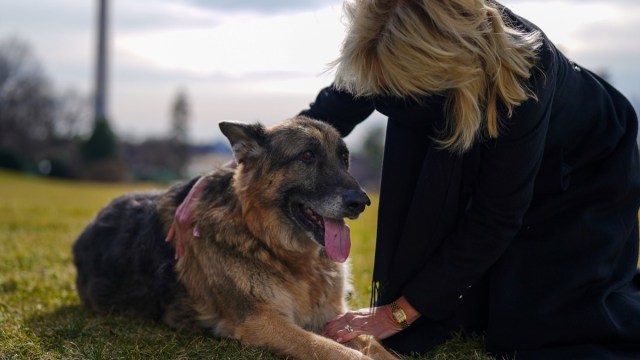 It’s a moment that pet lovers have been waiting for: Champ and Major have officially moved into the White House along with their family. President Joe Biden and First Lady Jill Biden‘s two German shepherds are making themselves at home, as these official photos of the First Dogs on the White House lawn show. Keep reading to see what will surely be the first adorable snaps of many, and for some incredible shots from last week’s event, check out The Most Striking Photos From Inauguration Day.

Editor’s note: This post previously referred to the First Dogs’ Instagram page, which has since been revealed as possibly not being associated with the White House. The quotes from the account have been removed.

Major frolics in front of the Washington Monument

“Champ and Major have joined us in the White House!” Jill Biden tweeted on Monday, along with heart and paw print emojis. And they certainly look thrilled to be there. In one shot by White House photographer Adam Schultz, Major, the younger of the boys, gets his zoomies out in front of the Washington monument. For more photos you won’t want to miss sent right to your inbox, sign up for our daily newsletter.

And looks handsome in a close-up.

In 2018, the Bidens adopted Major, then 10 months old, from the Delaware Humane Association after being with his foster family for a couple of months. This makes Major the first shelter dog ever to live at 1600 Pennsylvania Avenue. For more famous fur babies, check out These Celebrity Pets Have Way More Followers Than You.

Champ snuggles with the First Lady.

Champ, on the other hand, isn’t entirely new to this game. He was a gift to the now-First Lady from then-Vice President Joe Biden and joined the family after he and Barack Obamawon the election in 2008. For a meaningful moment you may have missed from the inauguration, check out Oprah Gave Inaugural Poet Amanda Gorman This Symbolic Gift.

Major even got his own “Indoguration” Ceremony.

The Delaware Humane Association and Pumpkin Pet Insurance hosted a virtual “Indoguration” for Major, recognizing his status as the White House’s first rescued resident and honoring other adoptees. The First Pets weren’t able to be there, but the event raised over $100,000 for Major’s former home, according to USA Today. For more popular doggos, check out These Celebrity Pets Have Way More Followers Than You.

The pups already have their favorite spots.

Champ and Major’s move-in day was actually Sunday, January 24—a few days after their humans took up residence.

“The first family wanted to get settled before bringing the dogs down to Washington from Delaware,” the First Lady’s spokesperson, Michael LaRosa, told the Associated Press on Monday. “Champ is enjoying his new dog bed by the fireplace and Major loved running around on the South Lawn.” For more cute celeb puppies, check out Matthew McConaughey’s Family Just Adopted 2 Rescue Puppies in a Week.