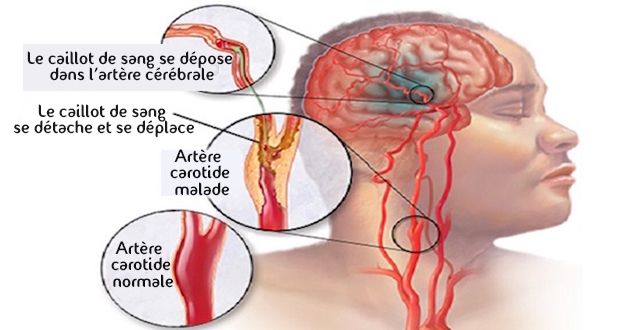 A stroke occurs when the blood supply to part of your brain is interrupted or reduced, depriving brain tissue of oxygen and nutrients. So, within a few minutes, the brain cells start to die. Stroke is therefore a medical emergency and prompt treatment is crucial.

In this article, we reveal the 10 warning signs of stroke you should watch out for.

Both types of stroke deprive part of the brain of blood and oxygen, causing brain cells to die.

What is an ischemic stroke?
Ischemic stroke is the most common and occurs when a clot blocks a blood vessel and therefore prevents blood and oxygen from reaching part of the brain. This can happen in two ways:

· When a clot forms somewhere in the body and lodges in a blood vessel in the brain. This is called an embolic stroke.

· When a clot forms directly in a blood vessel in the brain. This is called a thrombotic stroke.

10 stroke symptoms you should watch out for
There are more than 130,000 strokes each year in France, or one every four minutes. According to INSERM, stroke is the leading cause of disability occurring in adulthood and the second leading cause of dementia and death.

Major symptoms
– Sudden paralysis or numbness of the face, arms or legs. It usually happens on one side of your body. When this happens, try to lift both of your arms above your head at the same time. If one arm starts to drop, you could be having a stroke.

– Difficulty walking: You may trip or experience dizziness, loss of balance or loss of coordination.

Less frequent symptoms
The symptoms below occur most of the time in women:

– Sudden nausea and vomiting for no apparent reason

– loss of consciousness, confusion or seizures

– A hiccup that does not stop

– Unexplained pain in the face and limbs

– Shortness of breath for no reason accompanied by chest pain

Then ask him to raise his arms and see if it drifts. Finally, ask them to say a relatively simple sentence and watch if their words are scrambled or if their speech is cloudy.

How to react in the event of a stroke?
– Contact the emergency room immediately and do not wait for the symptoms to disappear. Know that the sooner the patient is taken care of, the less sequelae he will have.

Also, it is best not to take the patient by car and wait for the paramedics. The latter will be able to perform first aid measures.

However, you should know that this is a warning indicating a major stroke.

– Take note of when the symptoms appeared because there are medicines that cannot be used after a certain time.

– Do not give aspirin to someone who is having a stroke. If it is bleeding, the aspirin will thin the blood even more.