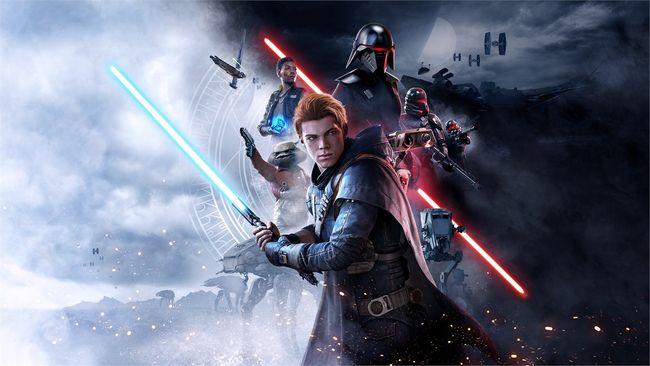 A galaxy-spanning adventure awaits in STAR WARS Jedi: Fallen Order, a 3rd person action-adventure title from Respawn Entertainment. An abandoned Padawan must complete his training, develop new powerful Force abilities, and master the art of the lightsaber – all while staying one step ahead of the Empire.

BECOME A JEDI
Cal Kestis—one of the last surviving members of the Jedi Order after the purge of Order 66—is now a Padawan on the run. Experience this all-new single-player Star Wars™ story from Respawn Entertainment and EA Star Wars on November 15, 2019.

A JEDI ON THE RUN
After narrowly escaping the Jedi purge, you’re on a quest to rebuild your fallen Order. Pick up the pieces of your shattered past and complete your Jedi training, all while staying one step ahead of the Empire and its deadly Inquisitors.

A GALAXY UNDER IMPERIAL RULE
The Empire seeks to eradicate all Jedi after the execution of Order 66. You, a Jedi Padawan-turned-fugitive, must fight for your survival as you explore the mysteries of a long-extinct civilization in hopes of rebuilding the Jedi Order.

THE GALAXY AWAITS
Use the Force to augment the way you explore, allowing you to traverse new paths and discover parts of locations you’ve been to before. Move quickly, though. The Empire is on your trail and won’t stop until every Jedi is exterminated.

The Empire is a pretty big threat throughout Star Wars Jedi: Fallen Order–but it’s not the only one you’ll face as you work your way across the galaxy. The planets you’ll visit are also home to a number of vicious creatures that want nothing more than to snack on an unwary Jedi. While you’ll face a whole mess of giant spiders, two-legged rats, and angry mountain goats, if you’re diligent in your exploration, you’ll also find several special Legendary Beasts hidden in the galaxy who are spoiling for a fight.

In general, Legendary Beasts are larger, tougher versions of the indigenous creatures on certain planets. There are four in total, and you can easily play the whole game without running into them. They’re worth seeking out though, as taking them down is usually good for an interesting reward–be it a secret or an upgrade they guard–as well as a big boost in experience toward your next Skill Point. The Legendary Beasts also award a trophy or achievement if you manage to hunt down all four of them. 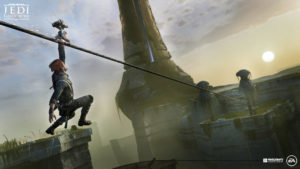 The trouble is, these creatures can be tough to find and tougher to eliminate. You’ll find one Legendary Beast each on Bogano, Zeffo, Kashyyyk, and Dathomir. All four are optional mini-bosses that can be tough to take down when you first arrive on these planets and your Force powers aren’t yet fully developed. That said, with the right strategies, it’s possible to best all four.

Here’s where to find each of the Legendary Beasts in Star Wars Jedi: Fallen Order, and how best to dispatch them.

You’ll fight a few of the annoying Oggdo frogs on your first outing to Bogano, but if you start checking side paths before or after you visit the big Zeffo vault looming over the area, you might catch sight of this much larger, much more dangerous version. From the Bogdo Sinkholes area, look for a couple of pipes crossing a gap toward a spinning pair of fans. Take the beam to the right and you’ll find a small cave blocked by some metal spires. Cut your way in and continue forward until you find the room with the Oggdo Bogdo inside. 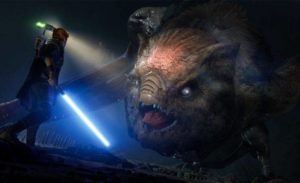 Like the regular Oggdo, the Oggdo Bogdo likes to leap forward and tackle you, snap at you with its jaws twice in rapid succession, and sometimes shoot out its sticky tongue to ensnare you. It does big damage when it lands these hits, but apart from its big jump attack, you can (and should) block them all. Defend against a few attacks to get a sense of its rhythm–it’s possible to parry its bites, but since it usually does two at a time, you can’t start swinging away until you’ve fended off the second attack. You might want to hold this battle until you earn the Force Pull ability, since you can use it to pull out the Oggdo Bogdo’s tongue and hack it off, damaging it and robbing it of a powerful (if somewhat rare) attack. 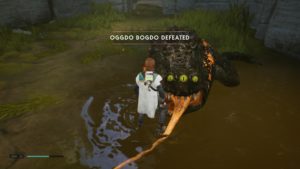 There’s another handy tip for this fight. On your first trip to Bogano, you’ll move through its alleys as you search the area, but after dealing with the Vault, you’ll be able to climb up on top of the area to reach the Mantis. As you head back to the ship, you might notice a few big holes in the ground. Look down through them and you’ll catch sight of the Oggdo Bogdo; these are actually entrances to that area that you can drop down through (and you might slip and fall into if you’re not careful). Dropping from above and doing a lightsaber strike when prompted will do a massive amount of damage to the Oggdo Bogdo. That makes this your preferred way of starting the encounter, giving you a major edge. Remember that if you’re in trouble and need to heal, you can also slow the creature, giving you time to maneuver and ask BD for a stim. 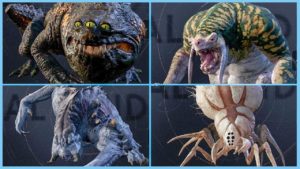 You’ll find this bigger, badder version of the giant spiders who live on Kashyyyk in the Imperial Refinery area. Head to the upper ledge of the area and look for a crevice you can sneak through. You’ll follow a tunnel until you hit the room with the spider, which will try to ambush you from above. Avoid its attack by moving quickly into the room and dodging out of the way.

Like the smaller spiders, the Albino Wyyyschokk likes to try to bite at you, to strike you with its front legs, and to leap on you to pin you down. It’ll also spray webs at you in an attempt to immobilize you, so you’ll want to stay well back from it whenever possible to give you time to dodge clear.

The Albino Wyyyschokk hits very hard, but its attacks are generally easier to deflect in comparison to the Oggdo Bogdo, and it tends to leap back when it’s in trouble, giving you time to breathe. Block its regular attacks and try to parry them, particularly the strike where it rears up and attempts to hit you with its legs. This is a slower attack so the timing is tougher to get right, but deflecting it gives you a big opening. Slowing the spider will also allow you to get a few good hits in, but when it jumps back, let it go. Take your time with the spider, only strike after dodging its leaping attack and after a parry, and you should make short work of it thanks to its cautious nature.

Rabid Jotaz (Zeffo) – Location
You’ll start to encounter Jotaz enemies on Zeffo, and the regular versions can be a pain because of their big swing reach and their fast, unblockable kicks. A bigger, scarier, and faster Jotaz is located in the Crash Site area, which you can reach from the Imperial Headquarters. Once you’re in the area, look for a Jotaz wandering around on a platform near the back of the area (not in the center of the round arena-looking spot), and climb up the nearby wall to find a laser barrier. Overload it with BD and follow the path inside to find the Rabid Jotaz hanging out underneath a big broken fan.

This fight can be tough thanks to the big turbine in the center of the room that makes it difficult to get around. The Jotaz has more reach and speed than its smaller counterparts, so it can make short work of you if it catches you with your defenses down. In general, keep your distance to avoid its fast, tough-to-dodge kick attack. Block or parry its regular blows, but be aware that it likes to do them in combinations of three–and it will often follow up its diving attack with a backswing to catch you as you close in for a few hits.

The easiest way to deal with the Jotaz is to make liberal use of Force Slow to keep the creature from getting in several hits on you, but don’t let it lull you into a false sense of security. If you’re having a hard time, try returning after you’ve unlocked the Lightsaber Throw ability, which you can use to deal a bunch of damage to the Jotaz from relative safety. You can also try to climb up to the upper level if you get into trouble to get some distance and heal up, which allows you to strike the creature from above.

Nydak Alpha (Dathomir) – Location
The Nydaks of Dathomir are some of the toughest creatures you’ll meet thanks to their flailing fighting style. The Nydak Alpha, a bigger version of the usual creatures, is even worse. The good news is that it’s fairly easy to find in a small arena in the Strangled Cliffs area. Head toward the Nightmare Ruins, where you first meet the Stranger, and continue across the broken pathway to its end. Just before you head into the temple, make a right and look for a pair of walls you can run along. The pathway ends in the Nydak Alpha’s lair.

Nydaks have a tendency to fling their whole bodies at you with abandon when they fight, and even if you dodge or block their attacks, you’ll often get caught with a quick follow-up as they fling an arm around to get in that one last cheap shot. This is even true when they die, which causes them to go into serious death throes that can kill you if you’re not careful. The trick here is to keep your distance and to play patiently. You might see an opening to get behind the Nydak and strike it, but you should be aware you’re almost definitely going to take damage from a counter-attack. Get used to when these happen so you can block them or get out of the way, and never go in for more than a hit or two at a time–getting greedy will almost always cost you. 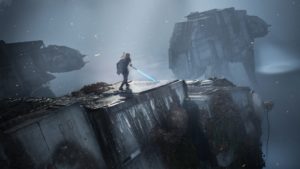 As with the other Legendary Beasts, Force Slow is your friend, allowing you to get out of tough situations and heal up, or to open a window for an attack. You might also want to rely on ranged attacks like Lightsaber Throw to get in some damage from safety. Most of the Nydak’s attacks can be dodged or blocked without too much difficulty thanks to your experience with other enemies; this thing is mostly just faster than the other enemies you’re used to fighting. Block and parry as best you can, get in a hit, then get out. Take your time to take down the Nydak and you should live through the fight, especially if you’re close to the end of the game and have a lot of upgrades.