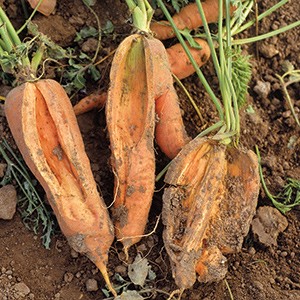 The range of diseases is particularly extensive. Fortunately, only a few are common in amateur culture. Some are eclectic and shared by various varieties. But many are more specific to a genre or a family. The fight, as always, will be much easier with good farming practices.

1- The cabbage hernia:
The hernia is a specific disease of cabbage and, to a lesser extent, of its parents such as turnips or radishes. The plants remain puny, while the base, at the collar, swells and necroses. It is a disorder rather than a disease, due to a soil that is too acidic. Regular inputs of agricultural lime can rectify the shot.

2- Mildew:
Mildew strikes a little at every door, attacking spinach, cabbage, turnip, potato and tomato. Large, yellowish patches appear on the foliage, which is wilting. The disease, especially common during cold summers, can spread to stems, especially on potatoes and tomatoes. A general-purpose fungicide, applied when the weather is favorable to the disease, helps to halt its development.

Mildew is a widespread disease, especially in dry weather. It is especially spectacular on the cucurbits (zucchini, gherkins, pumpkins ..) which it felt the big leaves, which dry. Treat when the first flowers appear. Be careful to use a fungicide (various specialties exist) reserved for vegetables, because the products intended for flowers are not suitable for this purpose.

4- Rust:
Rust, as its name indicates, marks its red spots on the leaves of garlic, celery, spinach, beans and leeks. These punctuations win all the foliage and sometimes the strain (garlic, leek), and turn black at maturity. The disease develops mainly between June and August. The treatments are above all good food, avoiding excess nitrogen, and bringing potash, which will make the plants more resistant. The anti-cryptogamic treatments, to be used sparingly, can be used if the weather becomes dry and hot, but at least a fortnight before the harvest.