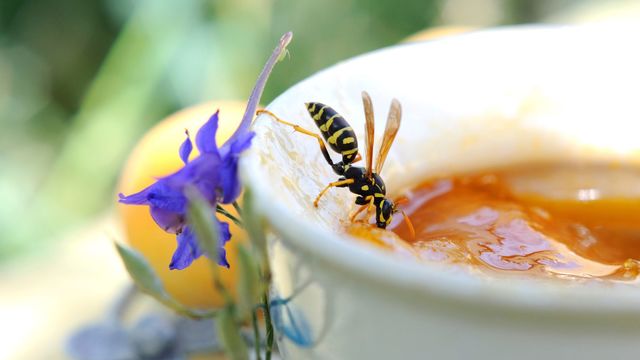 Bees and wasps, both belonging to the order Hymenoptera, play an essential role in the pollination of plants since this is one of their primary mission: in fact, the hairs and combs on their legs allow to hang pollen to deposit on another plant of the same species but female.

Even if you have channeled the bees with the installation of a hive for example, you can also have the formation of a swarm of bees or that of a nest of wasps, then you will certainly wonder about the reaction to have … which is not the same according to each insect.

How to distinguish bees from wasps?

Wasps are thinner than bees. In addition, the hairs of bees are more airy and fluffy than those of wasps (bottom photo) which are straight, smooth and less numerous.

The wasps feed their carnivorous larvae with insects while the bees feed their larvae with nectar and pollen. Finally, the yellow of the wasp stripes is brighter than that of the bees, and the black is more marked in the first while it is more brown in the second.

What to face a nest of wasps? Should we destroy it?

There are many types of wasps: solitary wasps that are not to be feared, and social wasps such as the common wasp (Vespula vulgaris) and the German wasp (Vespula germanica) which will be organized around a queen, colonize a place and sometimes sting us via the females who carry the sting.

From the spring, the queens, in the wasps, will start to build a nest from different small debris (wood, cardboard, paper …) that they will mix with their saliva to create a kind of paste that, spread gradually, will form a light nest of ovoid shape like a rugby ball.

But wasps can also settle in cavities like a hole in a tree, a wall crack, etc. They can also dig galleries in the land where they will live.

In addition to the pollination they provide, wasps also rid us of many insects hence their interest in the garden. First of all, try to avoid attracting wasps by covering your compost bin and your rainwater collector, by not leaving leftover food and sugary drinks outside.

If the nest of wasps is well installed and it is really important while being close to your home, or even inside (attic), it will indeed be prudent to make it disappear. It is not advisable to do it yourself for safety reasons: every year, people die trying to destroy a nest of wasps, following the bites of many wasps discontented. Do not call the firefighters who no longer have this assignment among their mission, except in case of emergency. Contact specialized companies.