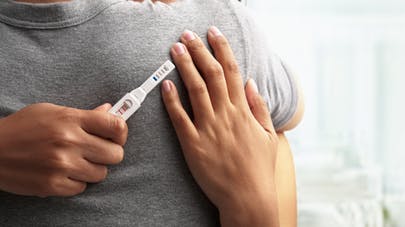 There are many pregnancy symptoms you would have to know before choosing a home test. These symptoms will give you a clear idea of ​​the changes in your body to prepare you accordingly.

Some pregnancy symptoms may be due to other medical conditions. The symptoms described below may not always conclude that you are pregnant. Instead, they are indicators of your pregnancy. Your pregnancy can be confirmed only when you miss periods, and when the pregnancy test indicates positive.

Find the complete list of symptoms that indicate that you are pregnant:

1- Implantation Bleeding and cramps:
The implantation bleeding is very light, you can observe a few drops of blood in your underwear or while wiping your vagina. It can last a few hours or several days. Heavy bleeding may be a sign of a miscarriage or period.

3- Heavy breasts:
Initially, the blood vessels in the breasts expand and begin to grow. Your breasts become larger and the areolas, the dark circles on the nipples, also become larger and darker. You can notice breast changes in a week or two after conception.

4- Fatigue:
Fatigue without reason can also be a sign of pregnancy, before a missed period. There is a peak in progesterone levels early in pregnancy that can make you tired and sleepy all the time. In addition, you may encounter many other changes in your body such as increased blood production to support the growth of your fetus. It depletes your energy levels, especially when you do not get enough minerals, vitamins, iron and fluids in your diet.

5- Nausea:
Nausea or morning sickness is a classic pregnancy sign that you may notice in the early stages. It will afflict you in the first weeks of the missed period even before your pregnancy is confirmed. You will feel dizzy, weak, and have a desire to vomit at times.

6- Bloating and feeling of tightness:
A feeling of heavy or swollen stomach is the most uncomfortable symptom before missed periods. It is accompanied by gauze. It can be caused by a hormone progesterone, which delays your digestion and causes problems like flatulence and constipation.

7- The urge to urinate:
Often wanting to go to the bathroom is a normal pregnancy symptom that you can get as soon as you miss your period. You can often have the urge to pee especially during the night.

8- Food aversions:
This is another symptom of pregnancy. You can no longer support your favorite foods, and their smell or taste can make you nauseous. About 85% of pregnant women experience food dislikes during their first trimester. Most of them return to their normal appetite as early as their second or third trimesters, but for some, food aversions can last the entire pregnancy.

9- Dizziness:
Dizziness and lightheadedness are also the first symptoms of pregnancy, caused by low blood pressure. In your first trimester, it is normal to experience dizziness during pregnancy as your blood vessels dilate, which lowers your blood pressure.

11- Constipation:
Hormonal changes, especially high levels of progesterone can affect your digestive system. Your stools become harder and move more slowly along the digestive system. If you experience constipation regularly, you should consider taking a home pregnancy test.

12- Headache and back pain:
The low blood sugar causes headaches that brain cells try to cope with the deficient levels of sugar supply they get. If you have frequent headaches, then this is a sign that female sex hormones such as estrogen and progesterone are working to prepare the uterus for the baby.

13- saliva:
This is not a common symptom of early pregnancy, but affects some women in their early pregnancy. Some women may notice that they produce excessive saliva before conceiving. This condition during pregnancy is known as ptyalism gravidarum.

14- Metallic taste in the mouth:
You can experience a metallic taste in your mouth with a strong dislike to some smells. Some women may have a persistent metallic taste all day long. Although the real cause is unknown, some experts say that this could be due to fluctuations in hormonal levels.

15- Excessive thirst:
The early stages of pregnancy make women thirsty very often due to increased blood volume. This causes frequent urination which in turn will make you want to have lots of fluids.

16- Lack of appetite:
Because of nausea and vomiting, your appetite will be at its lowest ebb. You will have hunger and cravings for foods like pickles. However, your appetite is on the downward slope, and may increase in the later stages of pregnancy.