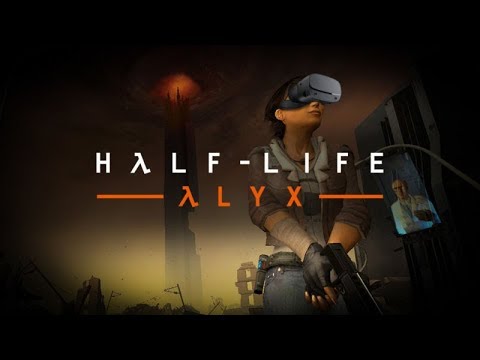 Valve tells us it’s a VR-exclusive. And it’s a prequel of sorts, set between Half-Life and Half-Life 2, in the days when Alyx Vance and her father Eli are building the resistance to the Combine’s alien occupation of Earth. You’ll play Alyx, and you’ll be wielding a way to manipulate gravity once more: the “Gravity Gloves,” which we can see Alyx using to pick up a pistol from a distance and interact with puzzles in the game’s first trailer — which you’ll find a little ways below. 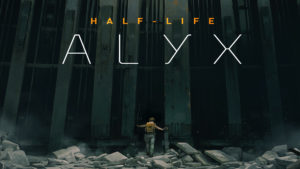 Lean to aim around a broken wall and under a Barnacle to make an impossible shot. Rummage through shelves to find a healing syringe and some shotgun shells. Manipulate tools to hack alien interfaces. Toss a bottle through a window to distract an enemy. Rip a Headcrab off your face and throw it at a Combine soldier.

But if all these things make you think it’s just going to be another glorified tech demo for VR, you might want to read Valve programmer David Speyrer’s answers to a few questions we asked: 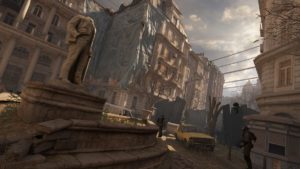 1) “It’s not a side story, nor an episodic one — it’s the next part of the Half-Life story, in a game around the same length as Half-Life 2.”

2) “While it does take place before the events of Half-Life 2, we actually recommend that you play through Half-Life 2: Episode 2 before you play Half-Life: Alyx, for reasons that will become clear as you progress.”

3) “Of course, we’ll have to wait and see how people react to Half-Life: Alyx once it’s out, but we’d love to continue pushing forward.”

Not a tech demo. Not necessarily just a prequel. And even if not in March, it sounds like there’s a chance us Half-Life fans will finally get some closure.

Fifteen years ago, Half-Life 2 ended with a bang. One of the all-time greatest video game cliffhangers, it literally stopped time in the middle of an explosion, praised you for your work, then let the credits roll. In retrospect, it wasn’t so bad: we got to pick up right where we left a mere 18.5 months later with Half-Life 2: Episode 1. 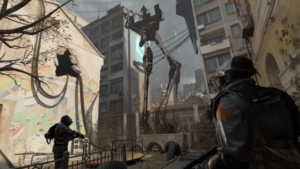 FINGERS CROSSED FOR CLOSURE
But we couldn’t say the same in 2007 when Half-Life 2: Episode 2 ended in tears — and then 12 years passed without Valve giving any indication we’d ever find out what happened to Gordon Freeman and Alyx.

Valve says you will need a VR headset to play, because Half-Life: Alyx is expressly designed for virtual reality. It won’t be coming to flat screens and traditional controls. But intriguingly, you won’t need to buy the company’s own Valve Index — the company tells us the Oculus Rift, the Oculus Quest with the new Link cable, the HTC Vive, even Windows Mixed Reality headsets should work.

Between nostalgia, the need for closure, and that multitude of choices, I wonder if this is the moment a few million extra gamers buy into VR.

There will be advantages to using the Valve Index’s VR controllers, though: Valve’s Bronwen Grimes told UploadVR that some “fun but not required” interactions like being able to crush a can in your hand won’t be available on other controllers.

Valve says you’ll be able to play it sitting or standing with three different VR movement styles — the teleport mechanic where you aim a wand where you’d like to go, then appear there, an analog stick, or a “shift” mechanic that sounds intriguing.

Also, Valve says the game — built on its new Source 2 engine — will provide a set of tools for anyone to build their own new levels. “Hammer, Valve’s level authoring tool, has been updated with all of the game’s virtual reality gameplay tools and components,” the company writes. 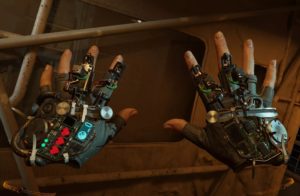 While you may wind up needing a pretty beefy PC to play the game at its best, the minimum system requirements Valve is listing aren’t that high: a Windows 10 computer with a Core i5-7500 or Ryzen 5 1600 or better, with a GTX 1060 or RX 580 graphics card or better. Those are high-end parts if you haven’t upgraded in a few years. You’ll need 12GB of RAM, though, which may be an upgrade for many gamers who were told 8GB was enough.

Half-Life: Alyx is available for preorder today for $53.99 (normally $59.99; it’s on sale) or free to Valve Index owners. Valve is also offering some special bonuses (gun skins, Steam VR environments) to those who purchase Valve Index hardware by the end of the year.

If you’re anything like me, you won’t rest until you’ve consumed every scrap of information, so here’s exactly what Valve’s David Speyrer told us, as well as Valve’s official press release below.

Is this a continuation of the events of Half-Life 2: Episode 2? Is this a full story on par with a major Half-Life title or is it episodic?

Half-Life: Alyx is set in the aftermath of the Combine invasion of Earth, before the return of Gordon Freeman in Half-Life 2. While it does take place before the events of Half-Life 2, we actually recommend that you play through Half-Life 2: Episode 2 before you play Half-Life: Alyx, for reasons that will become clear as you progress. It’s not a side story, nor an episodic one — it’s the next part of the Half-Life story, in a game around the same length as Half-Life 2.

Yes. It’s probably no surprise that many people at Valve have been wanting to get back to the Half-Life universe for a long time, and this experience has only reinforced that. In the process of creating Half-Life: Alyx, we’ve had to explore new ways to tell stories with these characters and this world, and we’ve discovered a lot of new gameplay experiences that go beyond what we’ve been able to do before. Of course, we’ll have to wait and see how people react to Half-Life: Alyx once it’s out, but we’d love to continue pushing forward.

Half-Life: Alyx is exclusive to VR, but not to Valve Index. We continue to believe strongly in the open PC platform, and it is our intention that Half-Life: Alyx is playable on any VR headset that connects to a gaming PC capable of running the game. If you have an HTC Vive, an Oculus Rift (or Quest with the Link cable), a Windows Mixed Reality headset — just to name a few — you can play Half-Life: Alyx. We put a lot of effort into making Valve Index the highest-fidelity VR solution on the market, and we think it’s a great way to play the game, but it’s absolutely not required.

November 21, 2019 – Valve, the creators of Half-Life and the Steam platform, today announced Half-Life: Alyx, a new, full-length virtual reality entry in the Half-Life series. Slated for release on Steam in March 2020, the title will be compatible with all PC-based VR headsets in March 2020.

Set between the events of Half-Life and Half-Life 2, Alyx Vance and her father Eli secretly mount the resistance to the brutal occupation of Earth by a mysterious alien race known as The Combine. As Alyx, players take the fight to the Combine to save the future of humanity.

Half-Life: Alyx was designed from the ground up for Virtual Reality and features all of the hallmarks of a classic Half-Life game: world exploration, puzzle solving, visceral combat, and an intricately woven story that connects it all with the characters iconic to the Half-Life universe.

“Everyone at Valve is excited to be returning to the world of Half-Life”, says Valve founder Gabe Newell. “VR has energized us. We’ve invested a lot of ourselves in the technology. But we’re also game developers at heart, and to be devoting ourselves to a VR game this ambitious is just as exciting. For that to come in the form of Half-Life feels like the culmination of a lot things we care a lot about: truly great games, cutting edge technology, and open platforms. We can’t wait for people to experience this.”

Half-Life: Alyx is powered by SteamVR on Valve’s Source 2 engine, and can be played on Steam with all PC-based VR headsets.

Pre-purchase now for $59.99 (US). Free for owners of the Valve Index VR headset.