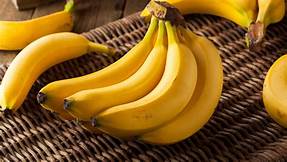 Here are the nutrition facts for bananas, according to the U.S. Food and Drug Administration, which regulates food labeling through the National Labeling and Education Act:

Not only do bananas provide a slew of health benefits, but they are one of the world’s most popular fruits. Global banana exports reached about 24.5 million tons (22.2 million metric tons) in 2020 according to a preliminary report by the United Nations. About half of them were imported by the United States and the European Union together. In the U.S., each person eats, on average, 13.4 pounds (6 kilograms) of bananas per year, according to the U.S. Department of Agriculture, making it Americans’ favorite fresh fruit.

A wide variety of health benefits are associated with the curvy yellow fruit. Bananas are high in potassium and pectin, a form of fiber, said Laura Flores, a San Diego-based nutritionist. They can also be a good way to get magnesium and vitamins C and B6.

“Bananas are known to reduce swelling, protect against developing Type 2 diabetes, aid in weight loss, strengthen the nervous system and help with production of white blood cells, all due to the high level of vitamin B6 that bananas contain,” Flores told Live Science.

“Bananas are high in antioxidants, which can provide protection from free radicals, which we come into contact with every day, from the sunlight to the lotion you put on your skin,” Flores added.

Bananas are good for your heart. They are packed with potassium, a mineral and electrolyte, which carries a small electric charge. As such, potassium sends an electric signal to nerve cells that then fire to keep the heart beating and muscles contracting; it also helps to keep a healthy balance of water in your cells, according to the Harvard T.H. Chan School of Public Health. Bananas’ high potassium and low sodium content may also help to maintain a healthy cardiovascular system and prevent high blood pressure, according to the FDA.

Bananas can be helpful in overcoming depression “due to high levels of tryptophan, which the body converts to serotonin, the mood-elevating brain neurotransmitter,” Flores said. Tryptophan is an essential amino acid that the body uses to help produce serotonin and melatonin — a compound that helps to regulate sleep, according to MedlinePlus.

Plus, vitamin B6 can help you sleep better, and magnesium helps to relax muscles.

Bananas are high in fiber, which can help keep you regular. One banana can provide nearly 10%of your daily fiber requirement. Vitamin B6 can also help protect against Type 2 diabetes and aid in weight loss, according to Flores. In general, bananas are a great weight-loss food because they taste sweet and are filling, which helps curb cravings.

Bananas are particularly high in resistant starch, a form of dietary fiber. A 2017 review published in Nutrition Bulletin found that the resistant starch in bananas may support gut health and help to control blood sugar. Resistant starch increases the production of short chain fatty acids in the gut, which are necessary to gut health.

For replenishing energy and electrolytes, bananas can be more effective than sports drinks. A 2012 study published in PLOS One looked at male athletes competing in long-distance cycling races. They compared athletes refueling with Gatorade every 15 minutes with athletes refueling with a banana and water. Researchers saw that the athletes’ performance times and body physiology were the same in both cases. But the banana’s serotonin and dopamine improved the athletes’ antioxidant capacity and helped with oxidative stress, improving performance overall.

Bananas may not be overflowing with calcium, but they are still helpful in keeping bones strong. According to a 2009 article in the Journal of Physiology and Biochemistry, bananas contain an abundance of fructooligosaccharides. These are non-digestive carbohydrates that encourage digestive-friendly probiotics and enhance the body’s ability to absorb calcium.

Some evidence suggests that moderate consumption of bananas may be protective against kidney cancer. A Swedish study published in 2005 in the International Journal of Cancer found that women who ate more than 75 servings of fruits or vegetables per month cut their risk of kidney cancer by 40%, and that bananas were especially effective. Women eating four to six bananas a week halved their risk of developing kidney cancer.

Bananas may be helpful in preventing kidney cancer because of their high levels of antioxidant phenolic compounds.

CAN YOU EAT TOO MANY BANANAS?

Eaten in moderation, there are no significant side effects associated with eating bananas. However, eating the fruits in excess may trigger headaches and sleepiness, Flores said. She said that such headaches are caused by “the amino acids in bananas that dilate blood vessels.” Overripe bananas contain more of these amino acids than other bananas. “Bananas can also contribute to sleepiness when eaten in excess due to the high amount of tryptophan found in them,” she said. Magnesium also relaxes the muscles — another sometimes-benefit, sometimes-risk.

Bananas are a sugary fruit, so eating too many and not maintaining proper dental hygiene practices can lead to tooth decay. They also do not contain enough fat or protein to be a healthy meal on their own, or an effective post-workout snack.

Eating bananas becomes significantly risky only if you eat too many. The USDA recommends that adults eat about two cups of fruit a day, or about two bananas. If you eat dozens of bananas every day, there may be a risk of consuming excessively high amounts of vitamins and minerals.

The University of Maryland Medical Center reported that potassium overconsumption can lead to hyperkalemia, which is characterized by muscle weakness, temporary paralysis and an irregular heartbeat. It can have serious consequences, but you would have to eat about 43 bananas in a short time for any symptoms of hyperkalemia to occur.

According to the NIH, consuming more than 500 milligrams of vitamin B6 daily can possibly lead to nerve damage in the arms and legs. You would have to eat thousands of bananas to reach that level of vitamin B6.

It turns out that the biggest risk from a banana peel might really be slipping on it. Banana peels are not poisonous. In fact, they’re edible and packed with nutrients. “Banana peel is eaten in many parts of the world, though [it’s] not very common in the West,” Flores said. “It contains high amounts of vitamin B6 and B12, as well as magnesium and potassium. It also contains some fiber and protein.” According to a 2011 article in the journal of Applied Biochemistry and Biotechnology, banana peels also have “various bioactive compounds like polyphenols, carotenoids and others.”

It is important to carefully wash a banana peel before eating it due to the pesticides that may be sprayed in banana groves.

Banana peels are usually served cooked, boiled or fried, though they can be eaten raw or put in a blender with other fruits. They are not as sweet as banana flesh. Riper peels will be sweeter than unripe ones.

Though green bananas, which are unripe, have an astringent flavor, studies suggest they provide several health benefits. And you don’t have to eat the actual banana, as green banana flour and other products have emerged on the market. A meta-analysis of 18 studies on green banana nutrition — mostly looking at green banana flour but also the pulp — revealed that these products can help with gastrointestinal symptoms and diseases as well as possibly helping to prevent or treat type 2 diabetes due to the resistant starch component that behaves like fiber to decrease glycemia, the researcher said in their study, published in 2019 in the journal Nutrients. Other potential health benefits included weight control and a decreased risk of renal and liver complications associated with diabetes. However, the authors stressed these are not conclusive results and that more studies are needed to firm up the findings. Overall, the authors said that green bananas and their products are a good source of fibers, vitamins C and B6, as well as several minerals, including potassium, phosphorus, magnesium and zinc.

At the other end of a banana’s life, the fruit starts to over-ripen and turn black. Research has shown that the levels of nutrients rise in bananas as they ripen. Bananas with dark spots were eight times more effective in enhancing the power of white blood cells than green-skin bananas, according to a 2009 study published in Food Science and Technology Research. White blood cells fight infections from bacteria, fungi, viruses and other pathogens.