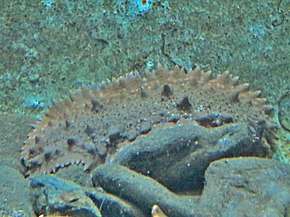 Speaking of sea cucumber, you will probably be led to believe that it is a vegetable that grows in the ocean, but no, sea cucumber is rather an animal of the type Sea cucumber. It has been used for several hundred years by traditional Chinese medicine to treat a wide variety of diseases. Currently, researchers say they have discovered anticancer properties in this marine animal.

For more than fifteen years many researchers around the world have paid special attention to sea cucumber, because of its healing properties. What is even more remarkable with this animal is its ability to kill cancer cells.

According to scientists, sea cucumber extract can be effective in treating several types of cancer, including lung, breast, prostate, skin, colon, pancreas and liver. This ability of sea cucumber to kill cancer cells comes from a key compound known as Frondoside A.

In a report published in the journal “Plos One”, scientists claim that frondoside A is triterpenoid (various organic compounds found in essential oils and plant oleoresins) powerful capable of killing 95% of breast cancer cells + ER, 95% of liver cancer cells, 90% of melanoma cells and 85-88% of lung cancer cells.

Ty M. Bollinger, author of “Cancer: Step Outside the Box,” states that sea cucumber can be used as adjunctive therapy for those undergoing chemotherapy because it is very effective at alleviating the side effects of cancer treatment .

He adds that “chemotherapy is a set of immunosuppressive drugs that kills cancer cells, but in the meantime, it kills your immune system … the properties of sea cucumber that are so fascinating is that it makes your immune system work. at the perfect speed … that’s why it’s so effective as a complementary treatment as well as a treatment in itself. “

Sea cucumber is considered a delicacy in Chinese cuisine. It is a recommended component of New Year’s party banquet plate called “The Eight Immortals Crossing the Sea”.

Other health benefits of sea cucumber:

– Improving gum disease:
A sea cucumber extract toothpaste has been found to improve healing in patients with gum disease due to the healing, anti-inflammatory and antibacterial properties of sea cucumber.

In addition, if you are wondering how to benefit from the properties of sea cucumber, know that it can be cooked and eaten, as do the Chinese, or dried, processed into powder and packaged in capsules to take in pill form.