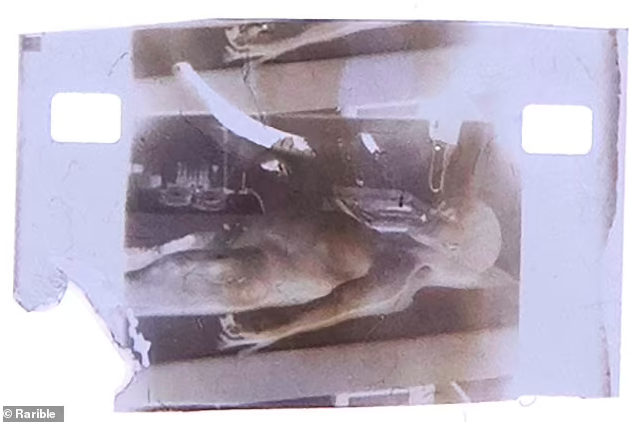 The film allegedly shows the autopsy of an extraterrestrial that crash-landed in Roswell, New Mexico.

The auction of this so-called evidence of extraterrestrials has an opening bid of $1 million or 450 Ethereum (a network for the cryptocurrency Ether).

A picture is worth a thousand words, but is a single frame of 16-mm film worth $1 million? That’s the opening bid for a negative frame of black-and-white movie footage from 1947, allegedly showing an extraterrestrial corpse on a medical examiner’s table.

The frame comes from an infamous and very implausible “alien autopsy” said to have been captured on film in 1947, following reports of a UFO crash at Roswell, New Mexico. Lore surrounding the crash claimed that the made-for-a-movie creature was aboard the UFO and died in the crash; it was then dissected in secrecy by the U.S. government, the tale goes, according to a statement about the auction.

In the autopsy footage, a lifeless humanoid figure lies on a table; a gaping wound can be seen on its right leg. It has a rounded trunk and belly, bulbous, dark eyes and a hairless head that’s much larger than the average human skull. Figures clad head-to-toe in white protective suits circle the “corpse” and perform a methodical dissection.

Where did this film come from? Rumors about a UFO in Roswell began to circulate in 1947, after a U.S. Army public information officer issued a press release describing a crashed “flying saucer” from Roswell that was now in the army’s possession. In 1995, a documentary that aired on Fox Television under the title “Alien Autopsy: Fact or Fiction” introduced TV viewers to footage of this alleged postmortem of the UFO’s “extraterrestrial” occupant, Live Science previously reported.

Ray Santilli, a British record and film producer, owned the footage. Santilli said that he acquired the film in 1992 from a retired U.S. military cameraman, during a search for archival footage for a documentary about Elvis Presley, according to the auction statement.

Though Santilli argued that the film was genuine, skeptics disagreed. Their suspicions were seemingly validated in 2006, when a sculptor and special-effects designer named John Humphreys claimed that not only had he crafted the alien in the autopsy footage, he had also appeared in the film as one of the pathologists, Live Science reported.

Another self-identified participant in the hoax came forward in 2017; filmmaker Spyros Melaris said that he had shot the footage in his London apartment, using a model filled with animal organs, as reported by Australian news site News Corp Australia Network.

But this strange story had one more twist: In 2019, a 2001 memo was “leaked” from the National Institute for Discovery Science (NIDS), a now-defunct private organization for researching the paranormal and UFOs. Allegedly written by NIDS physicist Eric Davis, the memo stated that a former CIA scientist named Kit Green evaluated evidence from “the Roswell Incident Alien Autopsy” and said that the footage was the real thing, The Sun reported in 2019 (The Sun is a British tabloid, known for sensational stories).

The memo reports that Green determined “the Alien Autopsy film/video is real, the alien cadaver is real,” according to The Sun.

With such a convoluted history, perhaps it’s not surprising that the film’s auction also experienced an unexpected turn of events. On May 27, bidding for the NFT of the autopsy film frame was underway at Rarible, an online marketplace specializing in NFTs, when the auction was derailed by a distributed denial-of-service (DDoS) attack — a flood of internet traffic that overwhelms a site. The listing crashed minutes before it was scheduled to conclude, an auction representative told Live Science in an email. A new listing is now in place, and bidding will continue until May 30, the representative said.